The Case of the Phantom Brick

During a project to expand a kitchen for a customer, we made an unsettling discovery. A previous owner had added a two story wing to the back of the original house, which was sheathed with brick. Instead of removing the brick sheathing, they elected to encapsulate it within the new framing, even bolting a steel lintel to a header over the opening between kitchen and living room.

Our goal in the renovation was to make the opening a good deal wider, which would involve removing the existing header after shoring the second floor, and replacing it with a longer one. To make things more complicated, we needed to remove and replace a similar header on the kitchen side.

The brick, which was invisible when we first had the design engineered, appeared as an unwelcome mass between the two headers with no obvious means of support – we calculated there were about 4 tons suspended by brick ties from the old wall sheathing. The shoring crew added shores under the brick mass while we tried to figure out a solution.

Our structural engineer suggested adding a freestanding W8 x 15 lintel which could be supported on continuous brick pockets which rest on the foundation on either side of the opening. The lintel had to be threaded through the small forest of shoring and we took down the shores under the brick, hoping that the brick ties would hold, then heaved it up into place. The space allotted was just enough to slide one end home and then put the other end in place – with nothing to spare. 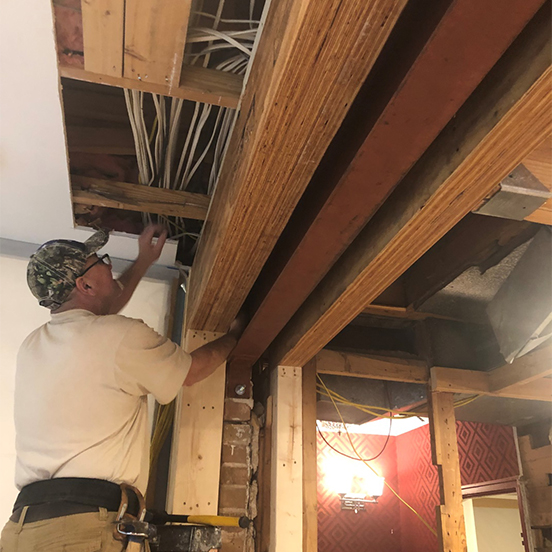